We watch lots of HGTV at our house. Julie especially likes watching Divine Design with Candice Olson. She’s got some amazing designs. My favorite show is Color Correction, with that “designer” that used to be on Extreme Home Makeover, Constance Ramos. I enjoy it in much the same way that I would enjoy watching a train wreck. It’s so bad that you just can’t turn away, though at the same time you cringe every time she displays one of her designs. It helps me harken back to the time when I first heard Aaron Neville sing. I remember thinking, in all seriousness, “Oh that’s nice. They let a retarded boy sing.” (By the way, I worked on that sentence for quite a while. The truth is that you just can’t say that in any way that’s PC. So I just said it. Apologies.) So it is with Constance: “Oh that’s nice. They let a color blind, tacky designer loose on HGTV.”

She’s a little OCD about her “palette” that she makes the poor saps who signed up to be on the show use. It’s purple, light purple, dark purple, and then some God-awful bright orange/yellow color that she dreams up. She thinks that particle board is crown molding; spray paint is for glass knick-knacks; and “art” is putting some little thing in the middle of a board, putting it on the wall, and show-casing it with the tackiest bright brass accent lamp that you’ve ever seen. It is truly unbelievable. I am absolutely floored that this woman has a show on television. It certainly is all about her. Somehow she comes out with 37 different outfits in a 30 minute show. Unbelievable.

The first episode we saw is highlighted below. The first picture is the “before.” 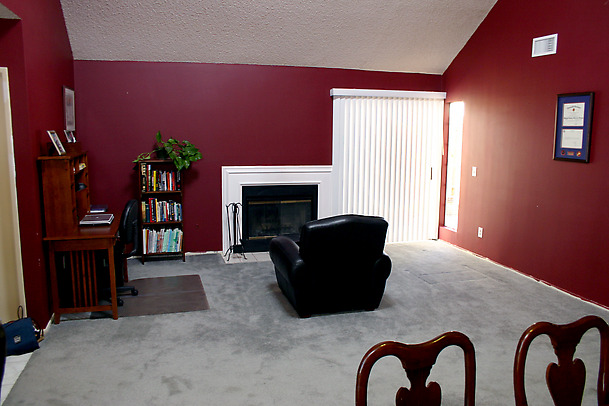 Notice the standard screen door above, with the standard vertical blinds (what else are you going to do with those doors, really?). Below is (seriously) the “after” shot. I think I honestly heard the “carpenter” say something like: “And, if you ever want to go outside, you just pull this board off of the velcro that’s holding it up, and you just go outside!” !!!!?!?!? Yeah, and then you just throw the piece of board off to the side, ignore the cheesy rope lights hanging out, and make your way outside. But, hey, at least you’ve got “balance” on that wall and some “custom” art pieces. Unbelievable. 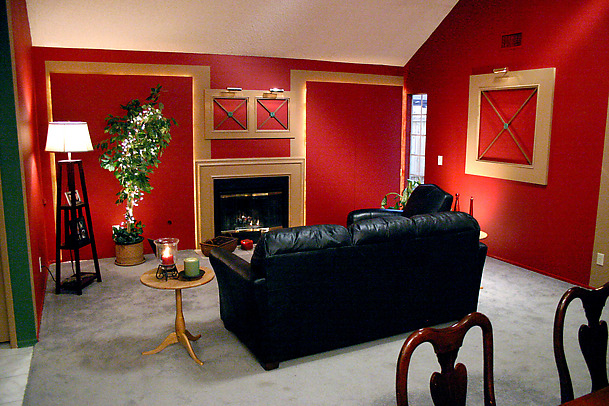 This is the before shot of the dining room. 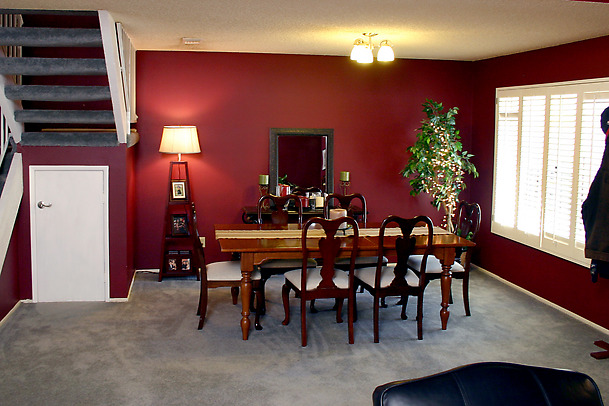 Notice the “crown moulding,” the custom crap (there’s just no other word for it) wrapping the stairs, and the very hip, stylish wallpaper in this lovely “after” shot. 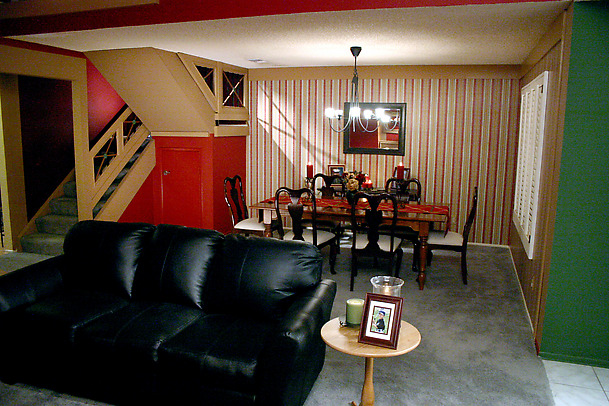 I leave you tonight with a close-up of the “custom” artwork on the wall. You should have seen the faces of these poor people when the big “reveal” happened. I hear the bank is demanding the loan be paid in full immediately because that house will never sell, even when the real estate market rebounds in 2060. 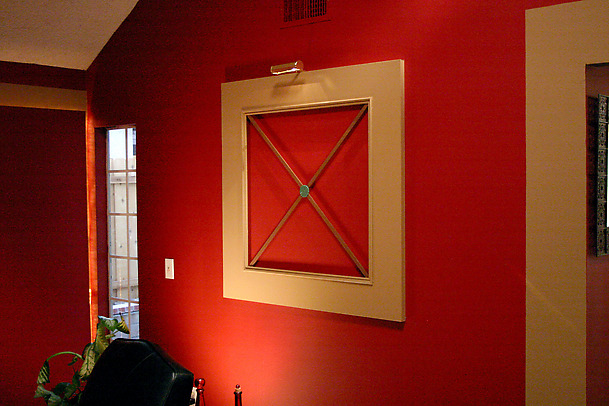 The girls had their spring break last week. It of course coincided with a horrendous week for me at work, so we were never able to go out and do all of the stuff we had hoped to. But the girls did have a “late night” with their friends, we went up to the White Tanks for some hot dogs and smores, and got to go swimming yet again. Mixed in there somewhere we were able to celebrate Gwenyth’s 2nd birthday a few times.

Last Friday night, we piled in the trusty van and headed out to the White Tank mountains. I spent the better part of that afternoon in the hunting and gathering mode. I hunted and gathered firewood from over in Marley Park. They had just planted a bunch of fairly big trees, so there were broken tree boxes all over the place. Those, along with some pallet-looking things that I pulled out of the dumpsters, served us well for firewood. I thought we had enough to burn for 3 outings, but we ended up burning it all in the one trip. Of course I am a pyro. Not sure if that had anything to do with it. I heard the next day that some folks swore that they saw another version of the “Phoenix Lights” that night. I don’t have the heart to tell them that it was just my bonfire at the White Tanks. Enjoy the picture of Lucy posing on her 3rd trip to the toilet (nice facilities, by the way! All of you Maricopa county residents can rest assured that your tax dollars have been well spent!). 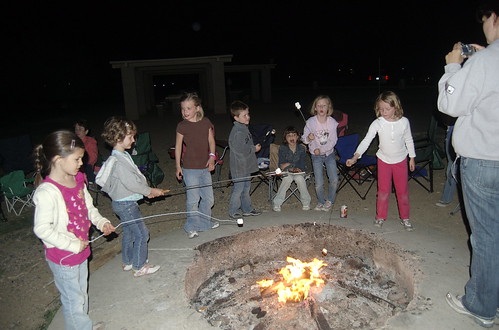 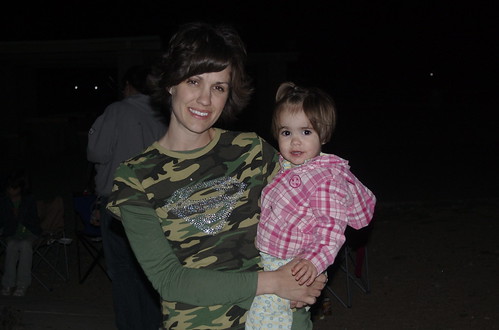 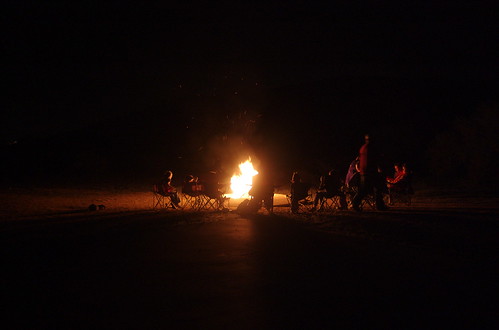 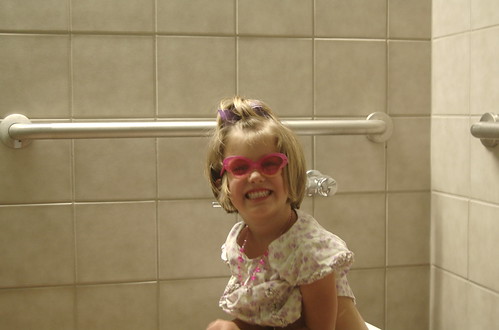 Saturday was actually Gwenyth’s birthday. We chose to let our friends throw a party for their little guy, Jackson. We haven’t said this out loud to each other, but I get the feeling that it’s because we knew that they would throw a better party than we would, and we didn’t want to miss out. They started heating their pool on Wednesday or so, to ensure that the temperature would be tolerable by noon on Saturday. Indeed it was great. I’m afraid that their gas bill may put a damper in their vacation plans this summer. Regardless, the girls were able to swim without fear of pneumonia. At least not until they got out of the water. It was a bit cool and windy on Saturday. 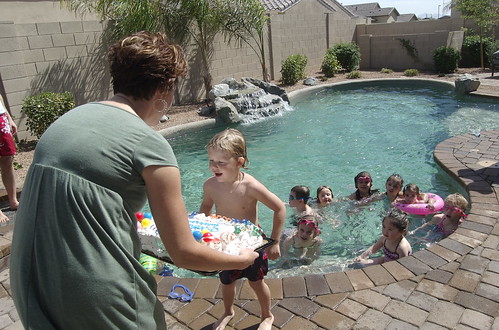 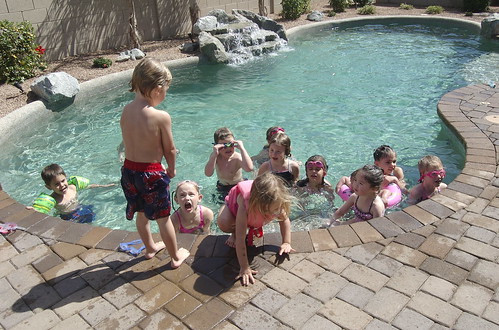 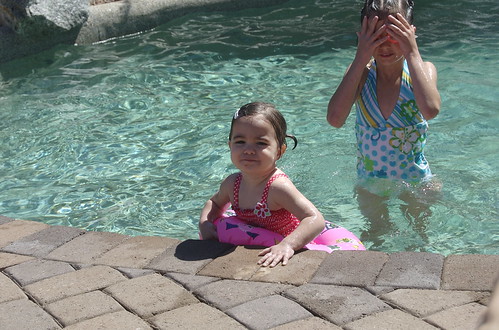 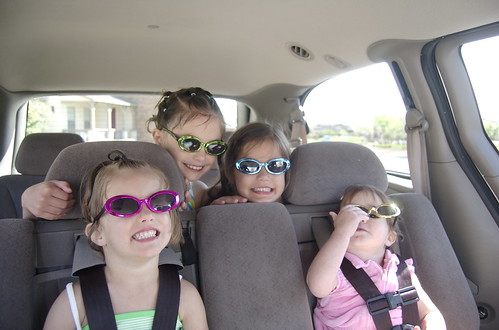 Tonight we officially celebrated Gwen’s 2nd birthday. We invited Grandma and Grandpa Elcock and great-Grandma Eslin out for a low-key evening. We went to Outback where Gwenyth got (what else?) “chicken noggats.” We came back home and opened up the loot and had a good time. She finally got her own little big wheel. I cannot believe that little Gwenny is 2! 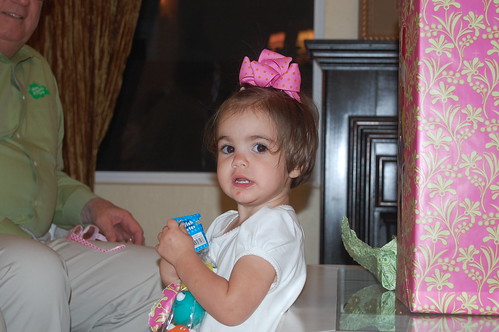 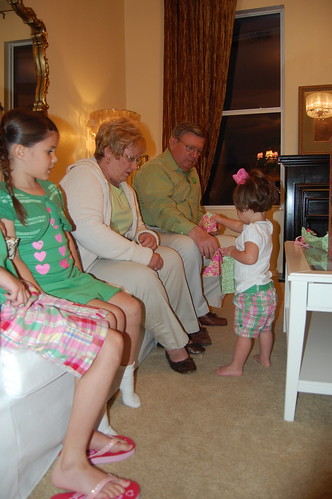 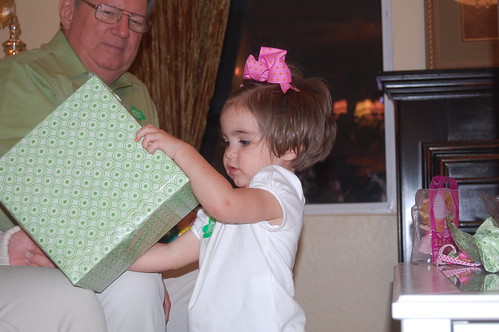 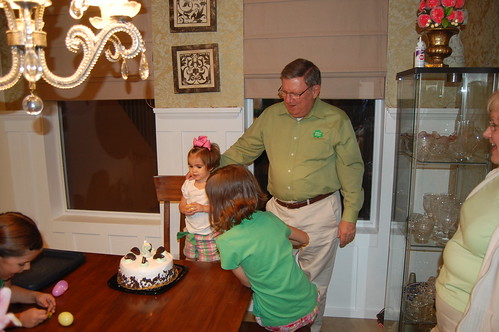 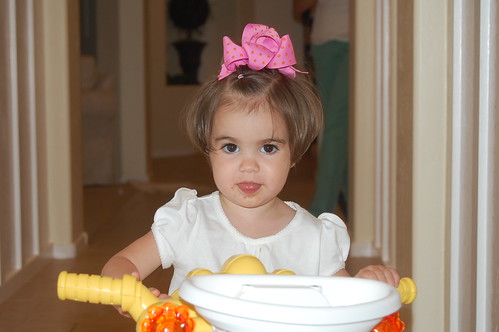 Finally, Julie couldn’t believe the similarities in these 2 photos. See if you can guess who is who. 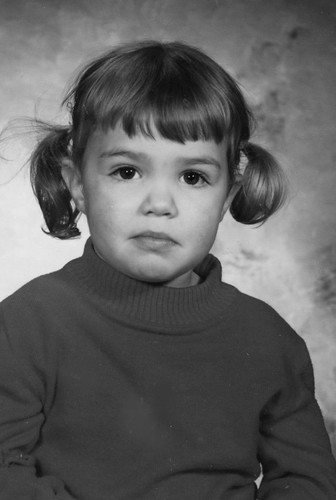 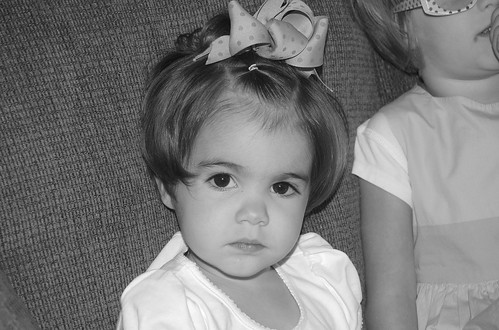 I just plugged in the camera and realized that I had a lot of pictures. Some from St George, some from Gwenyth showing off her belly, and some from my hike up to the White Tank Mountains last week. Just thought I’d share. 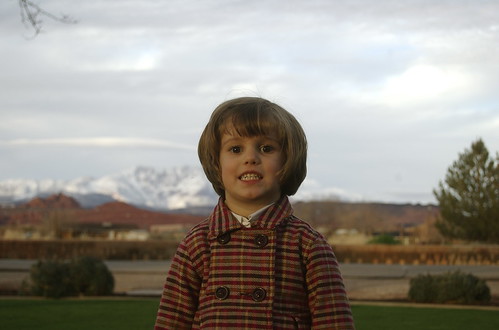 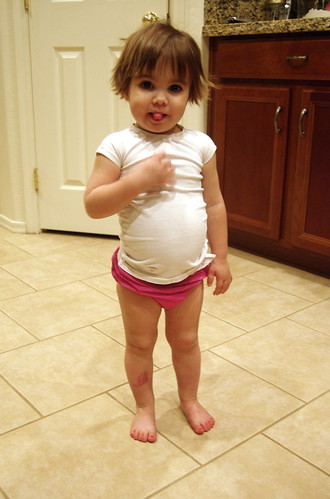 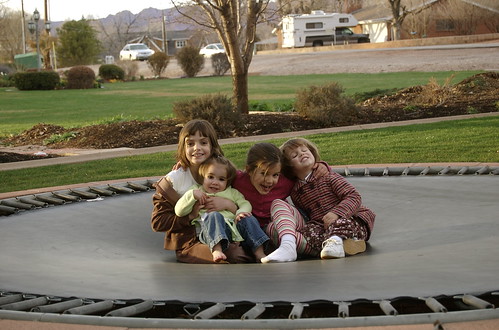 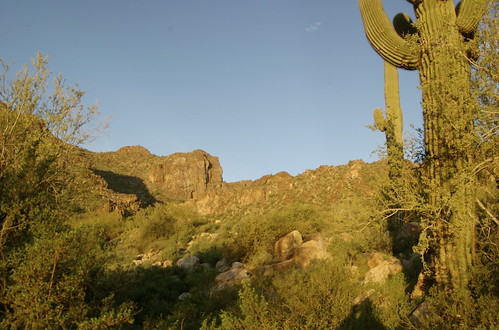 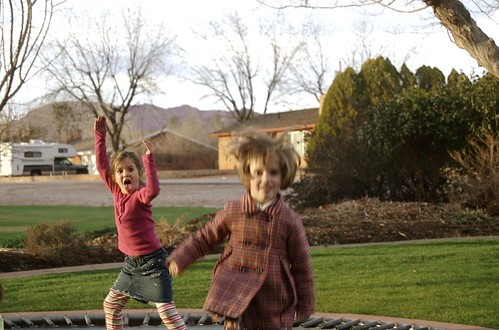 I just suffered through another episode of Celebrity Apprentice. I don’t believe that I have ever had the displeasure to experience someone as completely annoying and worthless as Ms Omarosa. So, this will be an Omarosa-free post on an Omarosa-free blog. If you have no idea what I’m talking about, consider yourself the lucky one. 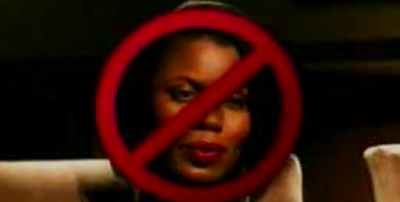 It’s been a long time. My strategy has been that you all miss my wit so much that you’ll click on the ads on the page so that I can afford to have this kewl blog. But my strategy will need to change. Especially now that Ali has thrown down the who-ha gauntlet. Who knew that not only was Ali an awesome Wii tennis partner (just a reminder that we destroyed Julie and Mid), she’s the witty one to boot. I’d like to think that we were pre-destined to be a Wii team. We’ll name ourselves the wits. Maybe I’m making to much of it.

We’ve had a good . . . (has it been a month since the last post) . . . month or so since the last post. We went up to St. George for Brady Dunkley’s return from New Zealand. We got to experience him doing the Hakka, or as we call it around here, the “wanna-hacka-lugi.” I had some classic footage of Michael doing the Hakka at Lake Powell. However, sadly, he commissioned some thugs to steal the camera out of our van about 2 years ago, so the evidence is lost to posterity. Shame, it is.

Life continues to move on for us. We stay up too late, eat too much, and generally act as the gluttons we are. One of Julie’s friends told me today that I was looking too skinny, so I promptly ate a bag of Chips A’hoy. Yes, a bag. That’ll help the figure.

Last weekend we planted a garden. We’ve got lots of tomatoes, some herbs, peppers, etc. We finally cleaned up the area around it as well. We got some paver/brick things to outline the area. It looks much better. While we were putting it all together, the girls decided that it was hot and that they needed to cool off in the pool. It was about 80 degrees on Saturday. It was a beautiful day. The girls found out fairly quickly that, although it was warm outside, it wasn’t warm enough to contrast the 50 degree water (or whatever it was). So this means that we only missed just over 3 months in our swimming season. Hopefully they’ll get over their pneumonia soon.

We met all the siblings (sans the Davies, who, Aaron said, were — appropriately — “praying for [his] soul”) out at Kabuki’s in Tempe on Saturday night. It was good to set out of 85379 for an evening. For some reason, I was feeling less than adventurous about dining (plus I’m a sucker for shrimp tempura), so I didn’t get any sushi. I got the tempura and chicken. The tempura was great. The chicken was a few steps up from Samurai Sam’s, at best. But it was fun to be out there. Last time I was down at the area where Tempe Marketplace is now, there were piles of junk everywhere and a few less than desirable places. Looks like it pays to be a developer with friends on the city council.

Spring Break is next week. I hope we’ll be able to get out and do something fun. I’m a little worried about Lucy and the sun/heat. She spent much of Saturday telling me that she was really hot and that she couldn’t get the sun off of her head. Poor girl.